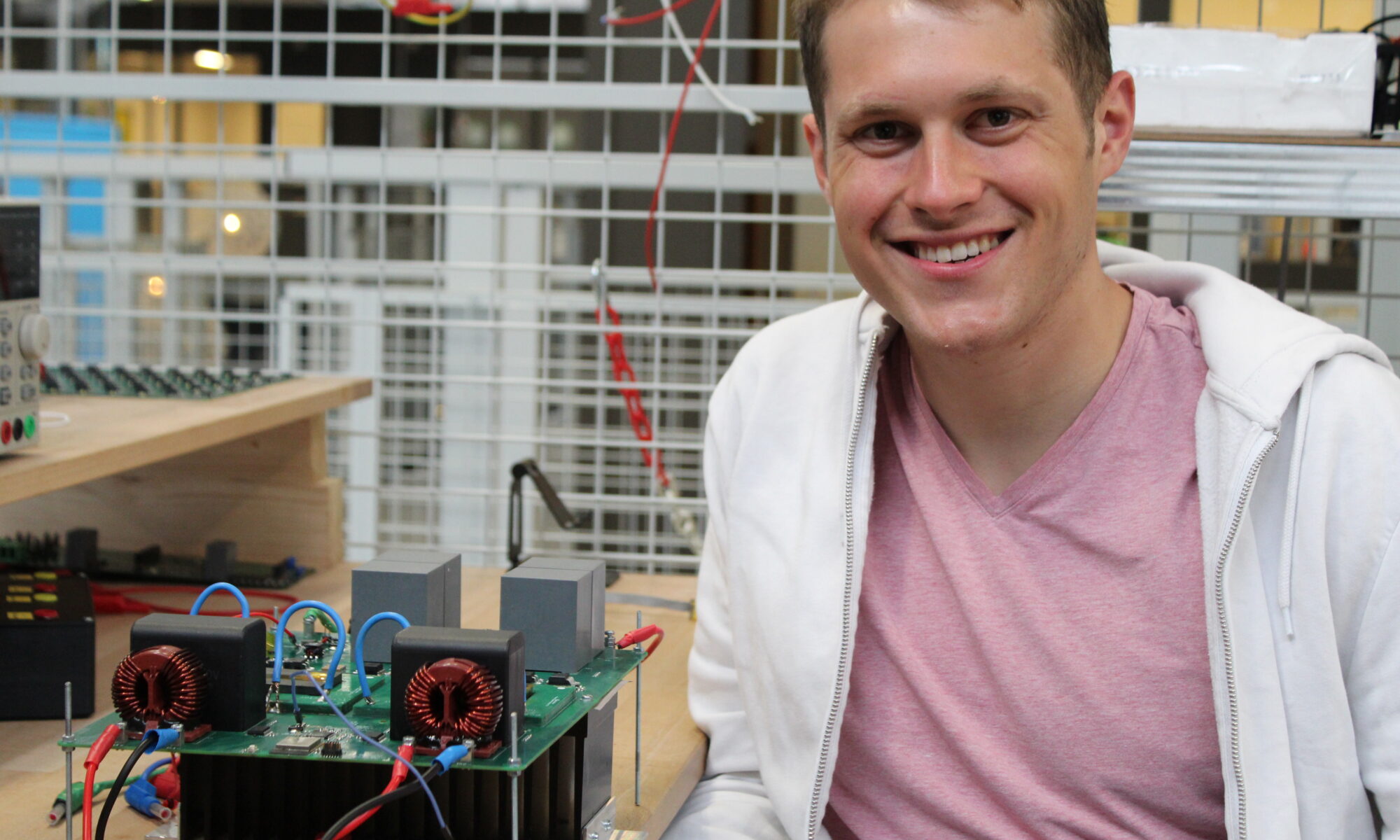 Yesterday, Jan Willem Fokkink successfully defended his Bachelor’s Thesis at the Hague University of Applied Sciences. He has been working on our string level solar MPPT converter, in particular on the software. This included implementation of maximum power point tracking but also implementation of droop control that allows also for islanding operation and decentralised curtailment in case of overproduction. Further, the handling of abnormal operation conditions and safety aspects where part of his work. Until now operation has been verified with solar simulators, up next is demonstration with real solar panels which we will be performing very soon at the Green Village in Delft. 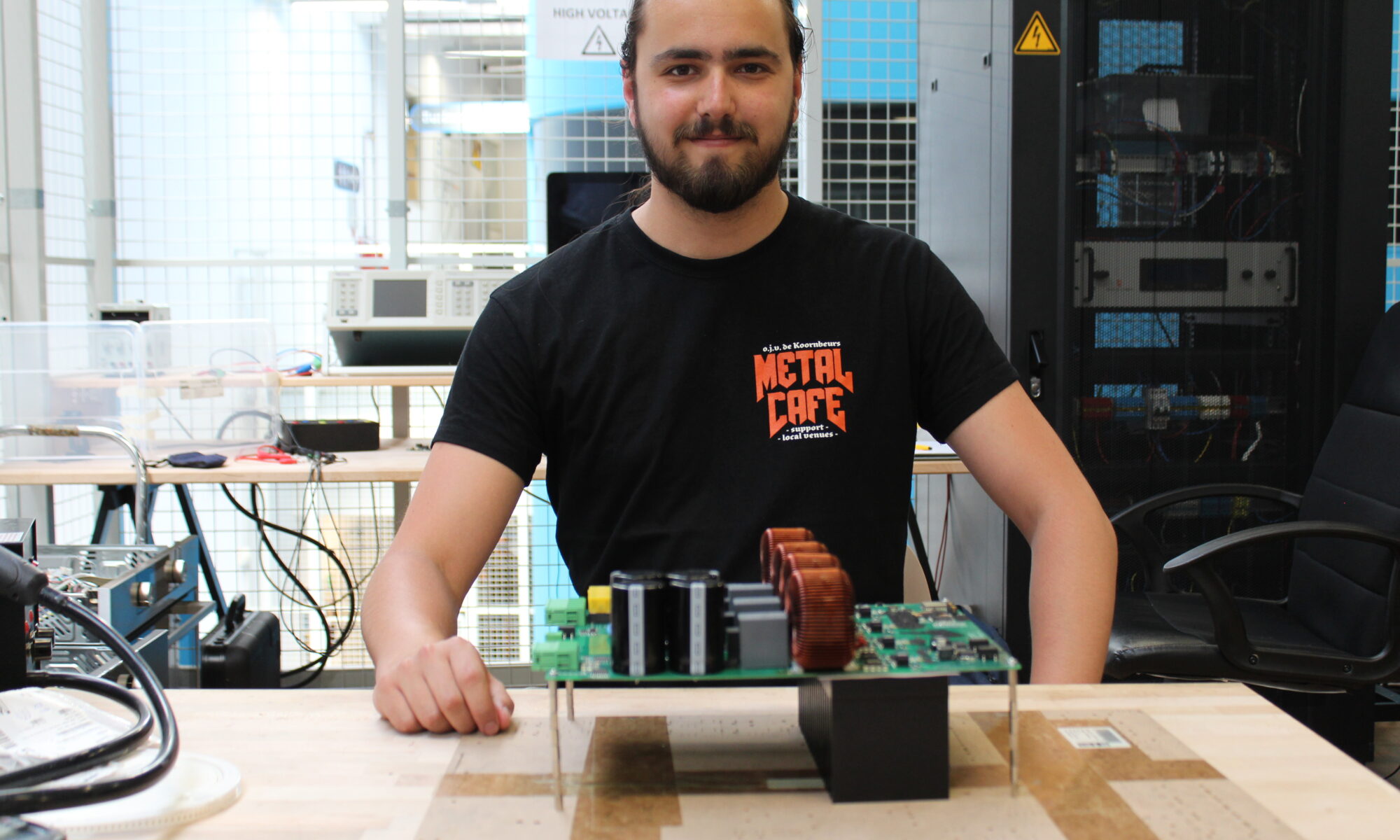 Casper worked on our active front end with which we are connecting our DC Microgrids to the AC grid. Alternatively this AC/DC converter can be used to drive motors or to create an AC grid for connecting legacy appliances in a DC environment.

We wish Casper all the best with the continuation of his studies at the Delft University of Technology were he will be pursuing his Master’s degree. 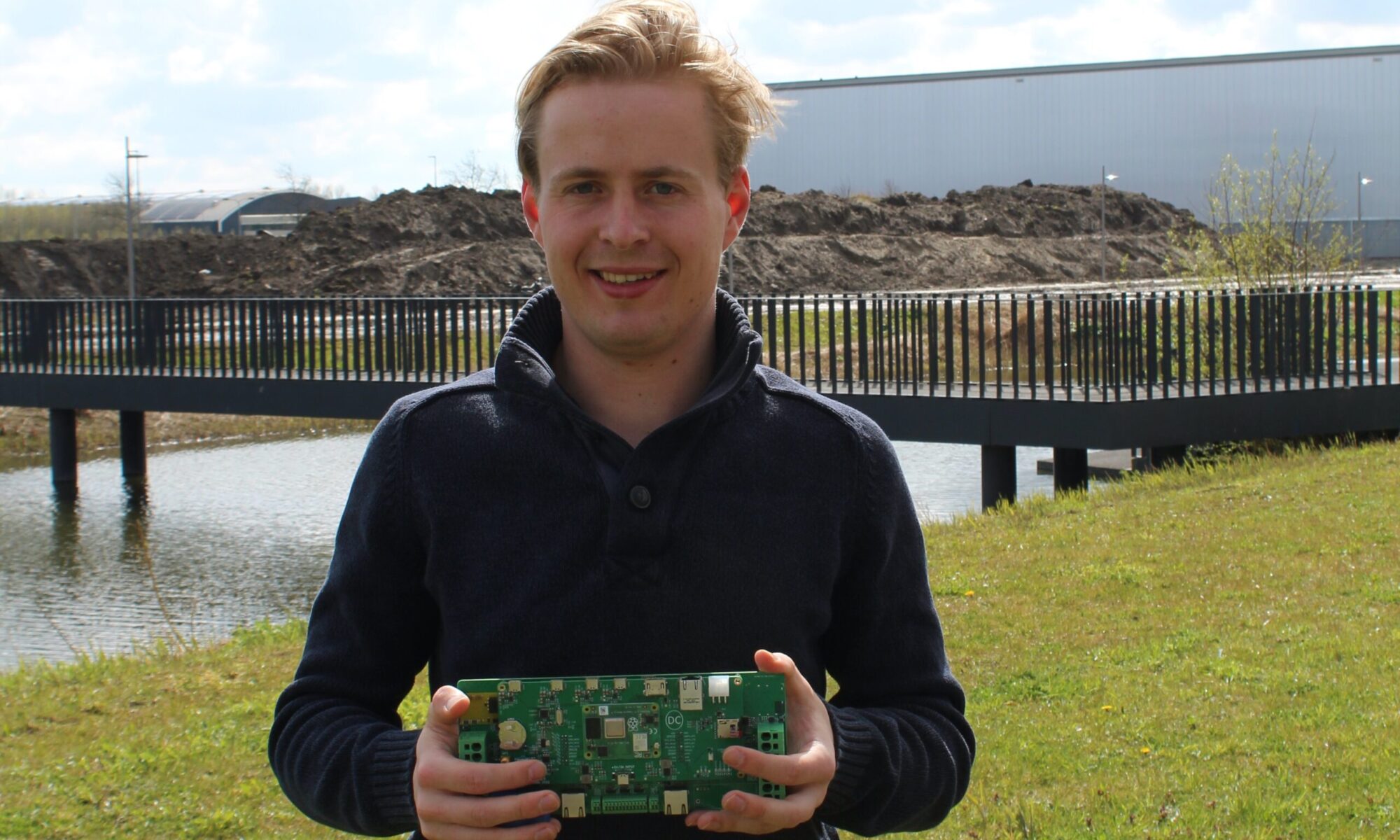 Last week Cas Pruisken successfully defended his Bachelor’s Thesis on the Development of a DC Electric Vehicle Charge Controller at The Hague University of Applied Sciences. He was awarded an outstanding grade of 9/10 for his work which he performed during the last months at DC Opportunities R&D. Cas has been working on our new V2G EV charger that will be able to charge from a 700V DC grid and could be integrated with DC public lighting infrastructure.

We are happy that Cas is staying with us as permanent staff after this milestone and we are looking forward to making many great developments in DC microgrid technology together.

A few weeks back we assembled the next prototypes of our Power Flow Control Converter. It will support power flow control in meshed DC distribution grids and be able to feed loads from two sides to more than double the power transfer capacity of a DC distribution cable to a single location. It supports bidirectional power flow and is made for bipolar DC grids of 350/700V DC. In this way, we can combine low power appliances like LED lighting at 350V and high power loads at 700V on the same grid. A further function of this converter is the ability to increase the voltage in very long lines. In this way, the feeding points in public lighting grids can be reduced. The converter is a partial power converter that only converts a fraction of the power. In this way, the system efficiency can be significantly be improved while the cost of the converter is only a fraction of traditional fully-rated converters. We develop this converter within our FLEXDC project with support from the Ministry of Economic Affairs of the Netherlands. 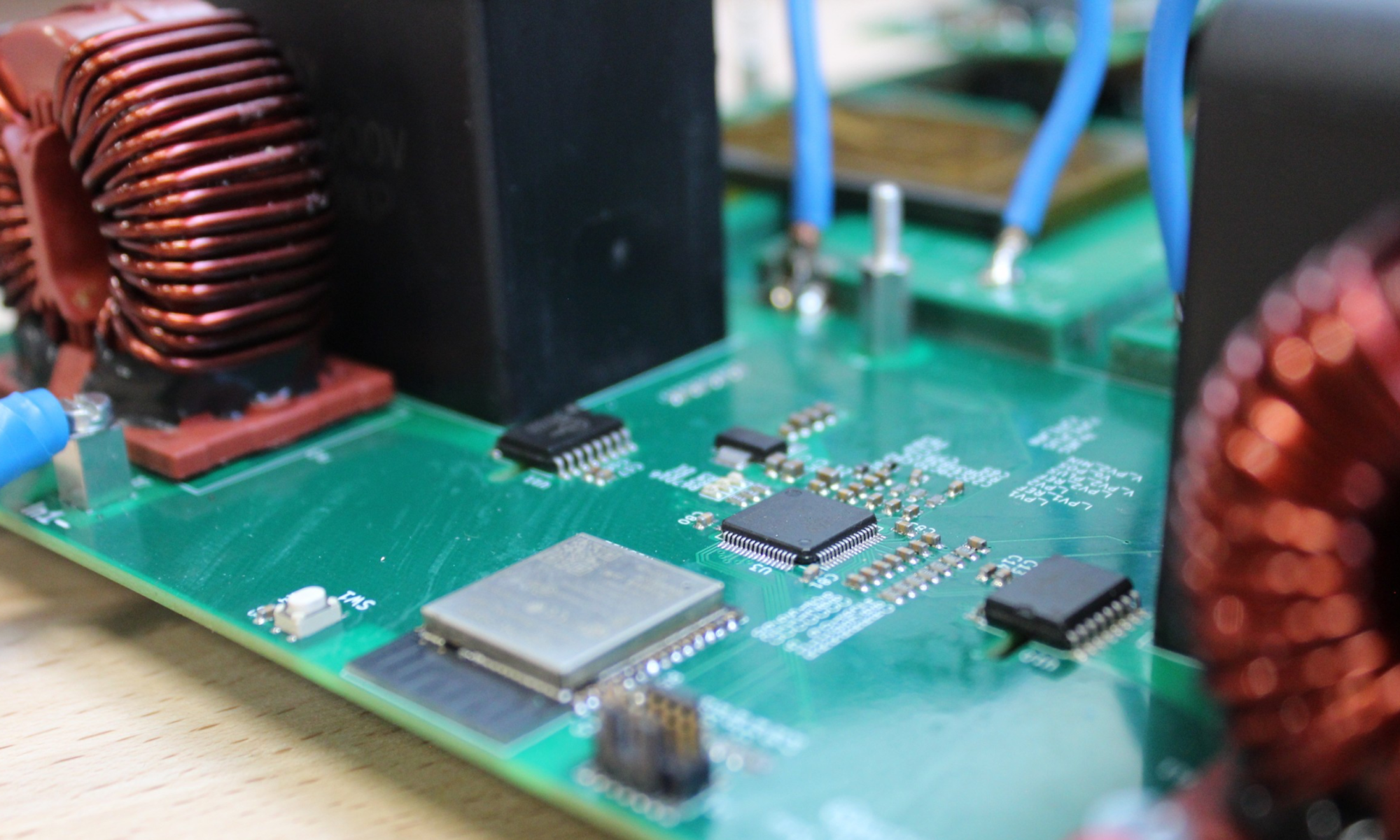 Last week Gerasimos Maroulis successfully defended his Master’s Thesis titled “DC-DC Converters for Photovoltaic Powered DC Microgrid” at Delft University of Technology. He was awarded an outstanding grade 9/10 for his work, which he performed during the last year at DC Opportunities R&D. Gerasimos has been working on our new string level solar maximum power tracking converter as well as a converter for balancing the poles in bipolar DC microgrids of 350/700V.

As of November 2020, Gerasimos is now part of our permanent staff and we are looking forward to making many great developments in DC microgrid technology together.

We are happy to announce that Jesse Echeverry today successfully defended his Master’s Thesis at Delft University of Technology. As usual these days, the defense was done online. Jesse joined our team over a year ago and in his internship started to work on and 100W inverter and arc-fault detection. In his Master’s Thesis titled “Isolated DC/DC Converters for DC Distribution Grids in Rural Electrification” he first developed a unidirectional DC/DC converter from 350V DC to 24V DC using GaN technology, planar transformer and switching frequencies up to 1.5 MHz. Then he continued to design a bidirectional version of this converter with a higher power rating. We are happy that Jesse will join us again after a well-deserved break to continue our development in this field.

Today Mohamed-Youssef Najjar successfully defended his Master’s Thesis with the title: Decentralized Optimal Power Flow for Bipolar DC Grids. Mohamed-Youssef has been doing already his internship with us at DC Opportunities where he did a power electronics converter design. Afterwards, he moved to the algorithm side of things and pushed forward our research and development on real-time electricity markets with dynamic pricing and demand response for future DC Microgrids.

We are happy to announce that Beer Witteveen successfully defended his Masters’s Thesis. Beer worked on the analysis of storage options for DC Microgrids in developing countries. He especially focused on micro hydro storage for the mountainous villages in Ethiopia.

Today, Lukas Irazusta Gorostidi successfully defended his Master’s Thesis titled “Power Electronics in Modular Solar Home Systems” at Delft University of Technology. During the last year, he has been developing the hardware for our modular solar home system. Several prototypes were realized and Lukas demonstrated that today to the audience in his well-attended public presentation. We are very happy that Lukas will stay with us after his graduation to continue this development!

There are many methods for solving an optimal power flow (OPF) problem. Most of them employ one central unit to solve the problem (centralized) while in others, every node/area computes for its coverage and send information to its neighbors every time. The mentioned method is called Distributed OPF. In this thesis, the Distributed OPF aims for a fast and resilient algorithm to solve a DC-OPF problem based on Consensus + Innovation (C+I) method. The research focuses on developing a faster algorithm in solving an OPF problem for a DC distribution grid. The current C+I method has tuning parameters, all of which are determined by trial and error for every case. They are sensitive parameters that determine the speed of the iteration to converge to the solution. This thesis attempts to form adaptive tuning parameters by understanding their function in every equation for a variable update. By understanding the purpose of each tuning parameter and the physical interpretation, some parameters can be formulated while the other is still determined by estimating the value. The losses and congestion are also taken into account. In the results, by formulating these parameters, they are shown that the iteration number has dropped significantly compared to the previous research. Regarding the resilience of the algorithm, the distributed approach relies on the information exchange between the nodes and delay on the information exchange will stall the whole iteration process. Therefore, an asynchronous algorithm is implemented to resolve the problem by setting a timeout duration. The timeout duration enables the algorithm to wait for the new information only for the desired duration, and therefore the calculation converges in faster.